AN IMPORTANT NEW COLLECTION FROM A MAJOR NEW ZEALAND POET

ANCHOR STONE by Tony Beyer is a collection of substantial new work by a senior and critically successful New Zealand writer. While some of the poems have had periodical publication in New Zealand and Australia, all are previously uncollected in volume form. Many deliberately address issues relevant to contemporary concepts of New Zealand identity and culture. Importantly for the work of a senior pakeha poet, there is a strong Maori element, as for example in “At Ratana”, a vivid depiction of events at a Labour Party Maori caucus hui. The approach throughout is vigorous, often entertaining, and consistently stimulating. As Mark Young states in his letter of support, it is “a significant book by a significant poet”. For anyone with an interest in NZ poetry, it will be a "must read".

Tony Beyer has never followed signposts; he has always attended to the road, rewarding us with a considered prosody that honours the moment yet goes beyond it. His language is disciplined, almost ascetic, but there is a generosity in even the most clipped line, a kind of ‘elated patience’ that is rare, and all the more welcome for its rarity, in New Zealand poetry. It is clear to me that Beyer’s lifelong focus on the vocation of making poems rather than the business of literary politics has come to a wonderful maturity in Anchor Stone.        ––David Howard

As a New Zealander, I acknowledge that English-language literature in this part of the world is only a very few generations old. Its distinct flavour is the achievement of close but significant ancestors. There is always a place for the local voice and its traditions. It’s also a useful reminder of how new concepts of identity don’t always eclipse those of the past, often in fact strengthening them. This place and the ways we find to voice our belonging in it are at the core of valuing environmental existence. We also honour other cultures by having a culture of our own, however flawed or patchy.                      ––Tony Beyer

from Long for this world

the camellia in front

of our front window

to feed her solitary chick

in the nest this

wet end of the year

but every start towards

is a hard one 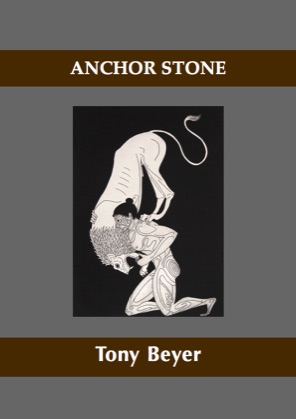