Drinking With Li Bai features 100 haiku composed by New Zealand poet Doc Drumheller while he was visiting China and India. Doc Drumheller was born in Charleston, South Carolina and has lived in New Zealand for more than half his life. He has worked in award- winning theatre and music groups and has published eleven collections of poetry. His poems have been translated into more than twenty languages, and he has performed in Cuba, Lithuania, Italy, Hungary, Bulgaria, Romania, Japan, India, China, Nicaragua, USA, Mexico, El Salvador, and widely throughout New Zealand. On his travels Doc Drumheller has represented the Waimakariri District as a Cultural Ambassador to Enshi in a Sister City Cultural Exchange. He was appointed New Zealand Director of the Silk Road Poetry Project, and has represented New Zealand at international poetry festivals in China and India. He lives in Oxford, where he edits and publishes the literary journal Catalyst. Haiku from this collection were selected for Ōrongohau Best New Zealand Poems in 2018 and 2020. Election Day of the Dead, Seventy Haiku from the Americas by Doc Drumheller was published by Cold Hub Press in 2020.

Liang Yujing is a Chinese poet, translator and scholar who writes in both English and Chinese. He was born in Changde and studied for his BA and MA in Wuhan. From 2014 to 2020, he lived in New Zealand and completed his PhD in Chinese literature at Victoria University of Wellington.

in a bamboo grove

drowning in the reflection

of a drunken moon

100 Haiku from China and India 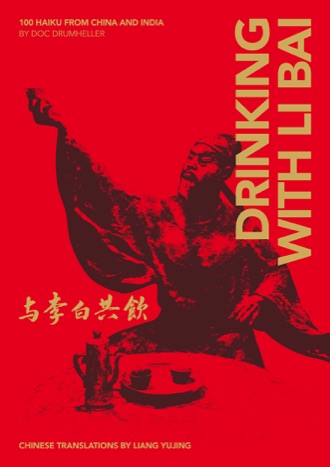