From your memories I will make

a prayer so as not to see you

With your steps I will fashion

a map so as to lose my way

In your shadow I will learn

the body that my hands desire

Thus in the dance I will not be with you

but you     not being there 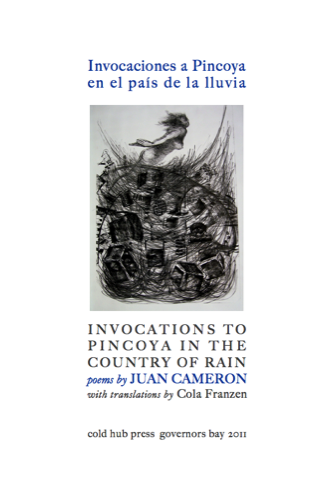 Invocations to Pincoya in the Country of Rain

with translations from Spanish by Cola Franzen

Invocaciones a Pincoya was written in 1983. The manuscript was lost, then rediscovered in 1992, & revised in 1993. This is its first English publication. The poems are addressed to Pincoya, a legendary mermaid, beautiful & alluring, who lives in & around the waters of Chiloé –forest Chile– a romantic landscape between the 42nd & 43rd parallels south of the equator, with virgin forests, huge lakes, many rivers, & heavy rainfall several months of the year.

Juan Cameron was born in 1947 in Valparaíso, Chile. Members of his generation were just starting their literary careers when the Pinochet dictatorship began. To circumvent draconian censorship laws that forbade any criticism of the regime, they resorted to a coded language that could be understood by anyone familiar with the situation. A charismatic reader & an inspiration to the younger generation, Cameron used black humor & irony, with absolute devotion to the cause of poetry & freedom. Not belonging to any official group, he could not earn a living for his family, & after some years of struggle, emigrated to Sweden, where he lived for ten years. Now back in Valparaíso, he lives within earshot of the creaks of the cable cars, with his wife & collaborator, the graphic artist Virginia Vizcaíno.