A Poet in Exile

a biography by Friedrich Voit

Karl Wolfskehl (1869–1948) came to New Zealand in 1938 as a refugee. Disturbed by the rising anti-Semitism he had left Germany for Switzerland and Italy in 1933. When Italy began to adopt anti-Jewish legislation he fled Europe for distant New Zealand which he had heard was an ‘island of racial equality’. For ten years he found asylum here and the peace to go on writing. Though almost blind, the open-minded and curious German-Jewish poet soon became engaged in the social and cultural life of the country, befriending many of the leading younger writers––R. A. K. Mason, Frank Sargeson, A. R. D. Fairburn, Denis Glover––and others not so well-known nowadays, such as Pia Richards, Phoebe Meikle, Ian Hamilton, and Ronald and Kay Holloway. Although they could not read his poetry in German, those who sought his company and read to him, introducing him to English and American literature, were impressed by his inexhaustible erudition. In New Zealand he wrote much new poetry, amongst it his best known poems To the Germans and Job or The Four Mirrors. The letters he wrote from his antipodean exile to friends dispersed around the globe are the testament of an extraordinary man and poet. As C. K. Stead has put it: ‘Wolfskehl was a true hero of those times.’

This first biography in English has been written with a particular focus on Karl Wolfskehl’s life in New Zealand. Author Friedrich Voit taught German literature and language at the University of Auckland between 1978 and 2015. His many publications on Wolfskehl include the German-language critical biography: Karl Wolfskehl, Leben und Werk im Exil (2005).

and edited by Andrew Paul Wood and Friedrich Voit (2016) 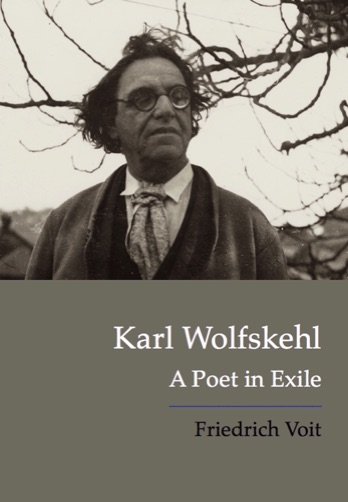 "At first Sargeson referred to Wolfskehl respectfully in his letters with academic title and surname, then after some months more familiarly as ‘the old doctor’, and only much later as Karl. Throughout their friendship he maintained a degree of awed admiration for Wolfskehl whom he nevertheless pitied at the same time. Sargeson, who felt himself as an outsider because of his homosexuality and his literary ambitions, which counted for little in New Zealand’s still somewhat colonial society, acutely sensed and understood the essence of Wolfskehl’s loneliness in his antipodean exile, a loneliness less a result of not finding enough or appropriate company, but of being cut off from the cultural and literary roots which had formed him and constituted his world. As Sargeson put it to E. P. Dawson: ‘Oh hell, I dimly perceive the values that this old man has lived for & will die for if necessary––then a great cloud of despondency comes over me. Why is the world in the state that it is? Must such values always be the prerogative of the few? I have discussed the point with the Doctor & he seems to have reached a state of serenity about it. He assures me that the bourgeoisie exists in Munich just the same as it does here, but he apparently isn’t upset about it.’ Sargeson understood that New Zealand was, and would probably remain, an uncongenial place for this German-Jewish refugee."

Read the review by Bill Direen: