TAKING MY JACKET FOR A WALK

me for a walk instead of the dog.”

In this new collection, Dunedin’s unofficial but authentic poet laureate––between revisiting 1950s childhood and destroying a stadium––encounters Basho returning from a hike on Mount Cargill, imagines Robert Falcon Scott’s last night in Dunedin, and asks the Occasional Big Question: “Childishly I ask for a sign: / a sign of some sort to show the way clear, /a path that might lead to some meaningful place.

Beginning with Lady Moss Revived in 1972 Peter Olds has published eight full collections of poetry as well as numerous broadsheets and chapbooks. He was a Robert Burns fellow at the University of Otago in 1978. In 2005 he was an inaugural recipient of the Janet Frame Literary Trust Award for Poetry.  His selected poems, You fit the description, was published by Cold Hub Press in 2014.

Reviewing You fit the description, Bill Direen wrote: “[H]is is a poetry of steady reflection upon people and things, the material world about him and those funny, delightful and doomed souls that once made Dunedin a city of ‘psychiatric clinics, pubs and bookstores’ . . . The years have taught Peter Olds how to reveal humanity by means of simple enough tools: his engaging voice, acumen, a gesture or a phrase isolated and noted, evocation of the scene, control of the pause, and humour.”

Cilla McQueen wrote: “In my mind’s bookshelf, this poet of the Dunedin I hold dear sits companionably between Baxter and Tuwhare.”

Visiting a friend at Wakari Hospital

and finding him not there

Outside the hospital entrance

a woman kneels in grass

before a cup of tea

closely engaged in rolling a cigarette

for a couple of days’ leave

but you’ve lost your cellphone

so I can’t ring

I wanted to tell you: When we die

we have no stories left to tell

while we still have the chance 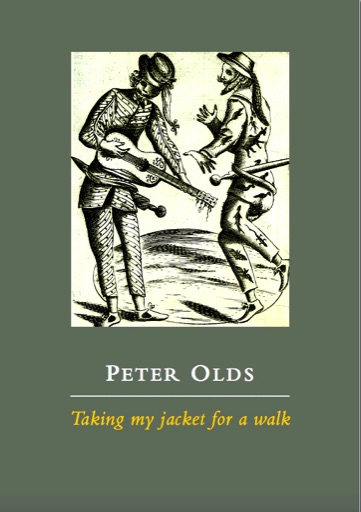