with translations by J. Kates

This sequence of 39 sketches attempts to describe a room.

"I go at the description from different sides, but all the attempts are futile; that is, they lead nowhere,” says the poet. “As a writer, I know that only a few of the phenomena of our world and the human condition (and these the least interesting ones) can be described in words. So I use poetry as a kind of super-language, by which I can (at least try to) express the ‘unspeakable,’ what Wittgenstein instructed us to keep quiet about.” Baitov’s poems “are almost always generated by a random thought, a random experience, even just a single random word or phrase.”

Translator J. Kates finds “something expansive and even world-wide about the ‘Thirty-nine Rooms’, for all its ostensible claustrophobia. It takes on Persian rubaiyat, Malaysian pantoum and Horatian ode in its Russian setting.”

Nikolai Baitov, born 1951 in Moscow, where he continues to live, was educated in higher mathematics, and worked for twelve years as a programmer. In 1987 he quit to become a church custodian. Between 1985 and 1989  he collaborated with Alexander Barash on the magazine Epsilon-Salon, and then with Sveta Litvak in the Literary Performance Club.From 1998 to 2006 he curated the literary salon ‘Premyera’ for the Zverevsky Center for Modern Art. His publications include Равновесия разногласий (Equilibria of disagreements, 1990), Bремена года (Seasons, 2001), Что касается (With regard to, 2007) and Резоны (Reasons, 2011). He was awarded a Brodsky Fellowship in 2007 and an Andrey Bely Prize in 2011.

J. Kates is a poet and literary translator who lives in Fitzwilliam, New Hampshire, USA.

every ghostly object in it. I wake up

and look all around  me — my eyeglasses

over there. A watch, a cup.

Here is my room. Dust on the icons, thick.

In the cracked icon-lamp a dessicated wick.

Antique books no one has opened, it appears,

for a hundred years.

pulsars, quasars, neutron stars, and in this place 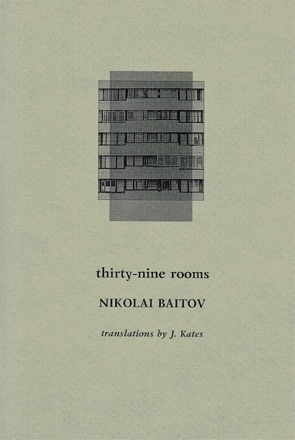